It’s been awhile since I’ve written a post.  The weather has turned beautiful so we have been enjoying being outside whenever we can!  🙂

With the arrival of summer, I know several people who are expecting their bundles of joy soon and that has made me start thinking about hospitals and delivery.  My daughter is turning one in a couple weeks so that might have something to do with it too.  I find myself thinking about how much has happened since little E came into our lives.

So with all this thought on hospitals, I figured my blog wouldn’t be complete without a “Hospital Bag Checklist” so here it goes!

What to take to the hospital.

The thing to remember is that every labour and delivery story is going to be different, and the length of your stay in the hospital may be different than someone else’s.  I had a c-section so I was in the hospital for 3 nights.  But I think that these things listed here would be nice to have regardless of how long you are in the hospital.  There are lots of lists on the internet to help you pack your bags, and here are my suggestions to add to it!  🙂

Basically you’ll be taking what you would take for an overnight trip.

Hope you found this list helpful!  What’s in your hospital bag?

So you know all those fantastic ideas that you can find on Pinterest?  You know, the ones with cute monthly pictures of a baby as it goes through its first year?  I personally loved the idea of taking my daughter’s picture each month with a stuffed animal so that we could see how she was growing.  The stuffed animal would give each picture a reference for comparing her size.

It worked great for the first few months…and then she started moving!  And add to that a complete obsession with the camera.  These pictures are almost impossible to get now!

Here are a few pictures from our recent photo shoot! 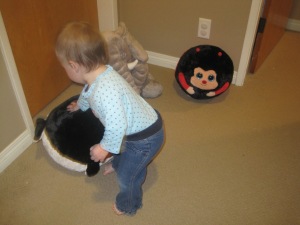 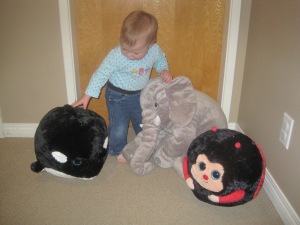 Ok, now let’s stand beside them all…

Nope, not going to sit beside the elephant… 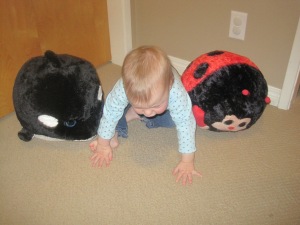 Or beside the whale and ladybug… 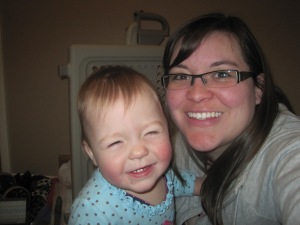 We finally got one decent picture! 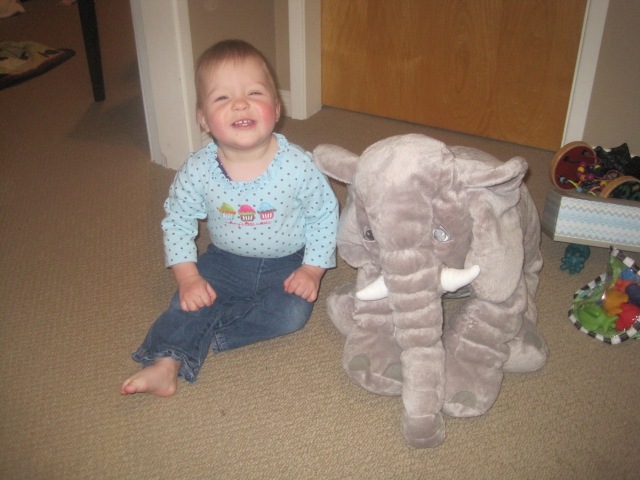 I think next time I’ll hold the baby and use myself as the reference!  Haha!

Today is my parents’ 39th wedding anniversary.  In this day and age when so many marriages are crumbling to pieces, I’m so proud and thankful that my parents have been together (and happy) for so long.

I think that a lot of people believe (probably unconsciously) that a marriage doesn’t take work, that things should just be “happily ever after” once the wedding vows have been spoken.  But that isn’t the case and my parents have been a wonderful example for me when it comes to working at their marriage and deepening their relationship.

So what is their secret?  I don’t know if they have an actual secret or not, but here are some things I’ve observed.

1. They respect each other.  The dictionary defines respect as: esteem for or a sense of the worth or excellence of a person, a personal quality or ability.  My dad respects my mom.  My mom respects my dad.  They value each other’s opinions.  They talk to each other in a way that shows they care for the other person.  They build each other up rather than lay blame on the other person.  If they differ in opinion on a subject (which happens often) they have learned to debate and discuss the issue without making the other feel like their opinion is wrong or stupid.

2. They go on dates.  Almost every weekend, my parents go on a date.  They have been doing this for most of their marriage.  They will go for supper or even a breakfast date.  The dates aren’t expensive.  In fact, Ikea is one of their favourite places to go for breakfast – it costs $1 per meal.  They use coupons and spend less than $20 each time they go to a restaurant.  The fancy places or food isn’t what is important to them, it is the time spent with each other.  My dad commented the other day that he really misses those one-on-one times with my mom when they aren’t able to go out.

3. They support each other.  My parents’ marriage has been filled with many challenges.  Four kids kept the house pretty busy.  They lived in another country for almost 10 years.  They have faced financial struggles.  Through all the difficult times they have been there for each other.  When mom needs encouragement, dad is the strong one.  When dad is going through a rough time, mom is there to build him up.  They know that together they are stronger, no matter what the difficulty they are facing.

And it’s not just during the hard times that they support each other.  Every day they encourage each other.  My mom is an artist and dad is one of her biggest fans!  My dad has his own business and the other day my mom was so excited about how he was doing.  You should have heard the pride in her voice.

4. They laugh with each other.  My dad has a rather dry sense of humor and he makes my mom laugh (with more than the occasional eye roll thrown in for good measure).  My mom holds her own and is able to make my dad chuckle.  They see the humor in life and it helps keep them from taking themselves too seriously.

5. They know that they can do things on their own.  My parents do lots of things together, but they also have different hobbies and interests.  For example, as mentioned earlier, my mom is an artist.  She goes to lots of artist meetings and attends art shows.  My dad doesn’t go to all of them, but my mom doesn’t take this to mean that he isn’t interested.  He loves her artwork and will attend the occasional art show where my mom has her artwork on display.  Last year, mom decided to try going on a creativity camping trip – a trip meant to help her refocus on the artist within.  She went on her own because she knew that she wouldn’t focus on herself if my dad went along.  It seemed a little strange to have mom go camping on her own, but dad understood why she wanted to do it and thought it was great that she was trying something new.

It took my parents a while to come to this stage of their relationship, where they are comfortable letting the other person have fun without them.  The neat thing about our family is that there are lots of opportunities to discuss things.  For example, of the four of us kids, three of us are married and the last is having her wedding this December.  This brings up lots of interesting discussions.  An example: at weddings there is often the unity candle.  The two candles are burning at the beginning of the ceremony and then the bride and groom light the unity candle together symbolizing two people becoming one.  But should the two candles be blown out?  Those two candles can be seen as representing two individuals.  Just because they get married, it doesn’t mean that they are no longer who they were before.  They still have the same personalities, the same interests, the same flaws, the same families.  Just because two people get married it doesn’t mean that they can’t still enjoy many of the things they did before they got married.  It is each person’s responsibility to do the things that they enjoy.  If you’re an artist, create!  If you are a reader, read.  If you enjoy music, go to concerts.  (My husband went to a concert last summer on his own.  It felt SO strange letting him go on his own, but we both knew that I would not enjoy the music and if I went we would both be miserable.  The solution, he went on his own and enjoyed the music.)  Don’t let the other person’s lack of interest keep you from doing what you enjoy.

6. They know that it is important to do things together.  If you are always doing things on your own, what is the point of sharing your life with someone.  My mom likes to bird watch.  This wouldn’t have been one of the things my dad would have started doing on his own, and he’ll often stay behind while mom goes on a bird watching hike.  But they get into the canoe and paddle away and my dad enjoys spending time with mom while she is bird watching and enjoys it when he is out with her.  (The same thing has happened between my husband and me.  In this case, he is the bird watcher and I just go along for the hike.  It means he is doing something he enjoys while we are spending time together.

Doing things that interest both people is another way of doing things together.  My parents are building a cabin on a piece of property outside the city.  They have been sharing ideas and dreaming of how the finished cabin will be.  They are building it together just like they are building their relationship.

7. They know who they are and continue to reflect on their behaviors, attitudes, etc. so that they can become better individually and together.  My parents are not afraid to practice self-reflection.  They are continually learning about themselves and each other in a genuine interest to help themselves and each other grow into the best people they can be.  They aren’t afraid to admit their flaws and try to improve.  They gently confront each other when they notice something in the other that needs addressing.

Before my parents got married they did premarital counseling.  They were given a book to read.  It is still in its original plastic.  Dad says they’ll break it open in case of emergency.  I don’t think that book is going to need to be read any time soon.

Happy Anniversary, Mom and Dad!  I love you both so very much!